Seishin Jack Fitterer of Indian Lake, along with five other Tendai Buddhist monks from the United States and Denmark became the first trained outside of Japan to receive Soryo Tokudo, an advanced ordination requiring a minimum of six years of study and practice. Thirty monks traveled from Japan to the Tendai Buddhist Institute (www.tendai.org) located in Canaan, NY, to take part in the ceremony on Saturday, October 23, 2010. It was officiated by Ven. Komori Shukei, envoy from the headquarters temple of the Tendai sect located on Mt. Hiei near Kyoto. This ordination ceremony represents the recognition by the Tendai sect in Japan of the training program developed at Tendai Buddhist Institute, the only such program located outside of Japan. 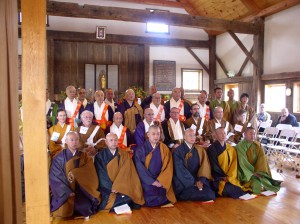 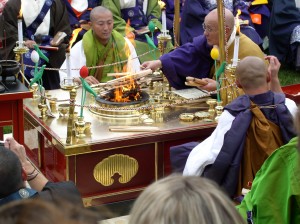 We began chanting this verse when Karuna Tendai Dharma Center was a single, solitary dharma center. Now after 15 years it is chanted in all those places where other sanghas have been established by those who have studied and trained here. We chant it in Canada and Colorado, Albany and the Adirondacks, Washington, D.C., Denmark and Germany, and elsewhere.

How many lifetimes we have waited is beyond my ability to see or to count—my vision does not go back so far. I leave that for another to relate, another more insightful than me. My vision does, however, go back 15 years to a warm spring evening in 1995 coming here for the first time where a handful people gathered—and a small handful at that—together with Monshin and Shumon. They had recently returned from Japan with the explicit aim of starting this Dharma center, based upon their experience living in a Tendai temple in Chiba. It was to be a place where people could, in their own community, with their friends, family and neighbors practice and study the Dharma every week under the guidance of an authentic teacher. This was the explicit goal. Another dream rested in the back of Monshin’s mind, too, one that he didn’t share with others—perhaps it was too audacious. And it was this: that if this actually worked, if people actually came to practice the Dharma every week, then perhaps he could train others as he had been trained by his teacher Ichishima sensei and they could go out and start additional sanghas and so foster the spread of the Tendai Dharma farther and wider than could be done by any single person working alone. Today’s ceremonies are a celebration of the fruition of those dreams.

After meditation was complete that first evening we all drove down to LaBella’s in Chatham and shared pizza and beer and friendly conversation getting to know one another in an informal way. We did this for the next few weeks, but it became obvious that this would be unwieldy as more people joined us. And it has been reported that some people don’t like pizza. So the suggestion was made, ‘let’s have a pot luck dinner every week after the service’. And we’ve continued to do this down to the present time.

Before we eat we stand behind our chairs, gazing at the spread before us and chant the Meal Gatha, the meal verse. It starts

First 72 labors brought us this food.
We should know how it comes to us.

As we receive this feast of the Dharma today, we should know how it comes to us. Seventy-two doesn’t begin to encompass all the labors. Monshin and Shumon themselves have performed infinite, myriad, uncountable kotis of nayutas of labors to establish and maintain this center. Add to that the contributions made by Sangha members, friends, families and neighbors; their financial gifts, the offerings of their physical labor, their ideas and advice, and their enthusiasm. Add to that the Jigyodan and other representatives of Tendai shu in Japan who have come in ones and twos, in groups of five or six, or thirty and forty, bringing material support, teaching support, and inspiration. We should know how it comes to us.

The Meal Gatha goes on:

As we receive this offering,
We should consider whether our virtue and practice deserve it.

It is a great offering that has been made by all. I’m not sure that whatever our virtue and practice that we can ever claim to ‘deserve it’–better to think of is as an undeserved gift that we receive despite our shortcomings—a gift we accept with deepest gratitude and sense of great responsibility. Myself, I feel like one of the 500 disciples who expressed their shock and amazement at Shakyamuni’s unexpected prediction of their future Buddhahood. In the Lotus Sutra they proclaim

We, hearing his voice
Predicting for us unsurpassed comfort,
Rejoice in our unexpected lot
And salute the all-wise Buddha.
We repent our errors;
Though countless Buddha treasures awaited,
With but a trifle of nirvana
We, like ignorant and foolish people, Were ready to be content.

We six rejoice in our unexpected lot and our hearts and minds are filled with joy, but it is a joy tempered with a sense of great responsibility. Another verse chanted each Wednesday is Hogo, a veneration of our lineage:

Originally we chanted this verse, as the rest of the service, in Japanese. One year, as we were working on the English translation, Shunshou Yamada sensei was here teaching during gyo and I asked him about the last line, which puzzled me. The first three lines were straightforward, simply listing the notable names, but the last line, fuku ju kongo¸ was a mystery. Kongo, I knew, was vajra—diamond or adamantine representing a brilliant wisdom that was able to slice through any hindrance, or perhaps a sudden flash of insight that illuminates the sky for just a moment and shakes the earth with the sound of thunder.  But what does fuku ju mean? And so he told me ‘long life, good fortune’. That’s it: ‘long life, good fortune, vajra, or diamond’, no subject, no verb, no object; an enigmatic phrase suggesting many possible meanings, but settling on none of them. For the purpose of the service we decided upon the wording we use now, “May the diamond path bring good fortune and long life to all sentient beings.” Perhaps, though, in this line Hogo is referring not only to the benefit that the lineage brings to others, but expressing its aspirations for the lineage itself: may the lineage continue to have a long life, may the lineage continue to have good fortune, may the lineage continue to shine with diamond-bright clarity dispelling any darkness.

Today six of us are named to this lineage which has already had a long life through 2500 years, through good fortune and bad, beginning in ancient India spreading through central Asia into China, Korea and Japan and now finds itself springing out of the earth here in Canaan and from here moving across North America and Europe

Vast is the robe of liberation
A formless field of benefaction
I wear the Tathagata’s teachings
Saving all sentient beings.

With deepest gratitude and respect, with a sincere heart, we thank you for all that you have done.

This entry was posted in Events, Tendai Buddhist Institute. Bookmark the permalink.